The Water = Hope campaign spent the past weekend in North Carolina with the H2O tour, getting even more country music fans involved with our campaign to bring people around the globe clean drinking water! We arrived in Charlotte on Friday morning and got to work, setting up for the day and preparing for our volunteer crew. We had 11 amazing volunteer join us: Joe, a volunteer from Cleveland, came out with his friend, and we had several groups of high school and college friends joining us as well. 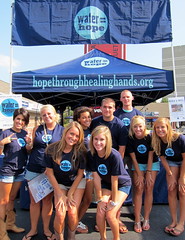 It’s been really inspiring to have so many students volunteering for us this summer, and we hope they are able to take the Water = Hope campaign back with them to their campuses this fall! 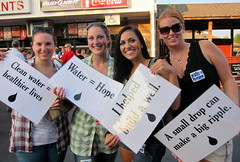 Our volunteers in Raleigh were a lot of fun; 7 of them came from Wake Early College of Health and Sciences, a college prep high school about an hour away (one of the volunteers, Lizzy, also brought her mom and a friend!), and our other three all attend a local Raleigh high school (sorry for forgetting the name, girls!). All were a blast to work with, and did a great job talking to fans all night long! 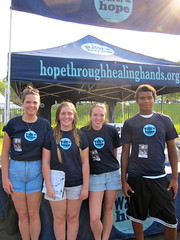 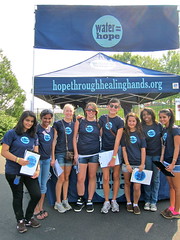 All weekend long, we talked with fans who were not only interested in supporting Water = Hope, but who told us stories of things they and family members were doing through churches, schools and in their communities to make clean water a priority for people around the globe - it’s so great to see this fan community engaged around this issue! The tour will resume next week in Spokane as we finally make our way out west with about nine more stops. We still have room for volunteers to join us, so be sure to get signed up today!

Charlotte gave us a lot of love - we talked to hundreds of fans about the importance of clean water, with many of our volunteers going out and working the parking lot and talking to the ‘tailgating’ crowd before they came in, to much success! We also got a nice shout out from a local radio station which helped us out quite a bit - lots of fans mentioned hearing about us before they came to the show that day. We also need to mention that we raised more money in Charlotte for our well building project than we have at any other show thus far on the tour, so a special thanks goes out to our volunteers that night and all the supportive fans!  The next day we were in Raleigh. Our normal set up routine had the added bonus of a GAC film crew being on site; shortly after our volunteers arrived, they came by with Brad to talk to me and Kim about what the Water = Hope campaign was doing on the tour, so watch for us at some point in the next week! Brad also took the time to talk to our volunteers, 10 high school girls (plus a mom and a boyfriend!) who, needless to say, were very excited to meet him! 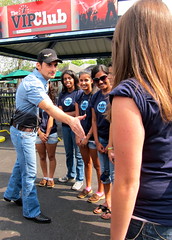