Water = Hope goes to Washington! We just finished another fun weekend on the road with Brad Paisley and the H20 Tour, making stops in Spokane, Portland and the Gorge!

We started our weekend off in Spokane with some great volunteer help: college students, a high school student and parents involved with a local home schooling organization all came out to lend a hand, doing a great job and signing up lots of new supporters for the Water = Hope campaign! 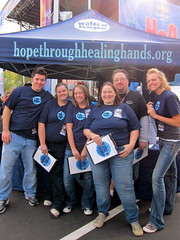 Our next stop was in Portland, where, after a summer of blazing heat and humidity, we were shocked to find ourselves...cold! Once again we were joined by an awesome volunteer crew: Chris just moved to Portland where he is soon to be joining the Portland Fire Department (congrats Chris!), and he was joined by Danielle, who is in nursing school in San Francisco but was visiting the Portland area. Ryan and Sarah are both students - Ryan is in med school, in fact! 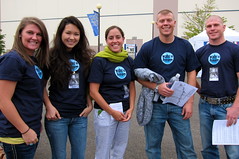 And we also had Kate joining us, who literally just moved to Portland the week before to attend college, and was looking for volunteer opportunities to get involved in her community. All of our crew did a great job in Portland, roaming the lawn area and talking to fans about the campaign, gaining their support. Though it was a smaller show, Portland showed us lots of love and support and we are excited to continue our organizing efforts in the community.

Next up was the Gorge, located in the middle of Washington state, and quite possibly the most beautiful music venue in all of America. We were way excited to be working there, and it was a HUGE show, with more fans in attendance than almost any other show we’d been at! 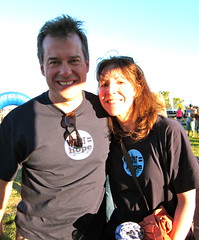 We were joined that night by Randy and Kim, a husband and wife team who had tickets to the show but wanted to help out. They came in went to work, signing up well over 100 new supporters in a short amount of time, talking to lots and lots of fans before joining their son and mom (or mom-in-law!) in their seats. They also made a very generous donation to Water = Hope, helping us reach our well building goal all that much faster, for which we are most appreciative!

We were also joined by our two recent Washington State U grads (a big Washington U rival game was going on that night, and, depending on who they talked to, they either got lots of love for their hoodies, or a lot of grief!) who were eager to get involved, and three new volunteers that Laura from Spokane had recruited for us (thanks Laura!). All in all, it was a great three days, full of inspiring stories from fans, and lots of support and enthusiasm about our work. 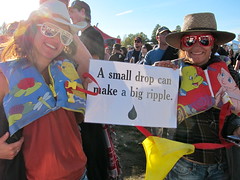 We are nearing our final stretch of the H20 tour, with only two weekends remaining. Watch for us in San Francisco, San Diego, Phoenix and Albuquerque this weekend!